Aki has purple dark hair, brown eyes and a beauty mark under her right eye.

Like all AKB0048 members and understudies, she has a heart shaped lining in her hair and her eyes.

She was born in Tokyo, October 3rd 1991. She and Misato Nonaka are the only promoted members of 6th generation of AKB48. She was part of Team Kaiga and part of Team J, from AKB48's first overseas sister group JKT48. Now she is a member of Team K. She is also a member of French Kiss with Yuki Kashiwagi and Asuka Kuramochi. She ranked #30 in this year election.

Akicha Galaxy Cinderella of the beach. 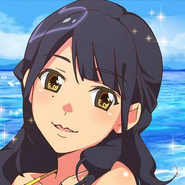 Akicha, Yukirin, Mayuyu, Sonata, and Kanata at the General Elections.

Akicha crying after the General Elections.

Community content is available under CC-BY-SA unless otherwise noted.