Start a Wiki
Akibastar (アキバスター, Akibasutā) is a planet located at some light years from Earth and the home planet of AKB0048, Tsubasa Katagiri, Rie Kitahara, Chef Papa, Ushiyama and Tomomi Itano's entire family. It is also called the "Home of 00 Stage".

Akibastar is surrounded by certain domes and the planet is less polluted than other planets such as Lancastar. It has a town, a lake and a subway station. The AKB0048 HQ is located at the centre of the town. Akibastar is not affected by the Entertainment Ban law. The entire city on Akibastar lies underground, due to the surface being ravaged by war. The planet is always safe and peace but not when the Deep Galactic Trade Organization's army the Destroy Entertainment Soldiers invade the planet for a period of time when finally AKB0048 managed to make them retreat. The planet is mostly ravaged after the invasion and is undergoing reconstruction. 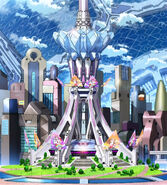 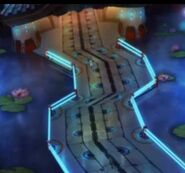 Retrieved from "https://akb0048.fandom.com/wiki/Akibastar?oldid=31299"
Community content is available under CC-BY-SA unless otherwise noted.