Asuka Kuramochi (倉持 明日香 Kuramochi Asuka), also known as Mocchii (もっち), is a member of AKB0048 who is the 9th person to succeed this name.

Asuka has black eyes and green curly hair. She also wears earrings that are studs with large hoops attached. Light-pink lipstick can be seen on her bottom lip. Like all members of AKB0048, she has a heart-shaped lining on her hair and eyes.

Mocchii Galaxy Cinderella of the beach. 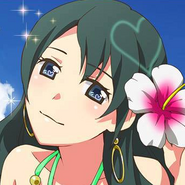