Atamistar (アタミスター, Atamisutā) is a planet located some light years from Earth. It's a beach resort planet with water covering almost the entire planet. It is said that it was on this planet that the former member of AKB0048, Mii-Chan, was last seen. In fact, Mii-chan was residing here, working as a photographer, until the entertainment ban made it difficult to find work. Thus, she came to Akibastar and became AKB0048's official photographer. 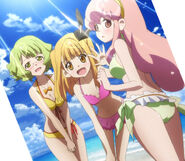 Add a photo to this gallery
Retrieved from "https://akb0048.fandom.com/wiki/Atamistar?oldid=30968"
Community content is available under CC-BY-SA unless otherwise noted.