Destroy Entertainment Soldiers (DES) are an anti-entertainment military force of the Deep Galaxy Trade Organization empire. They are the primary antagonist of AKB0048.

The DES was founded shortly after the Entertainment Ban Law was approved throughout the universe by the Deep Galaxy Trade Organization government. The main goal of this army organization is to apprehend and kill anyone who is practicing entertainment or is related to entertainment. They're not above of taking innocent civilians hostage if they refuse to cooperate with the DES. The DES possess a large quantity of battle ships, trained soldiers and mobile suits.

Destroy Entertainment Soldiers is the army of the Deep Galaxy Trade Organization government. Right after their establishment, planets such as Lancastar, Sagittariusstar, Funghistar, Kasumigastar, Tundrastar and Baltistar fell under the rule of the Deep Galaxy Trade Organization with Kasumigastar as the location of the central government. The DES is formed right after the DGTO establishment, seeing entertainment is the irritating thing in their lives. Entertainment ban is enforced after the State Supreme Assembly approve the law by Supermajority.

The DES prevents a group of people from entering an abandoned mine, suspecting that they are trying to see an AKB0048 concert. They tried to stop AKB0048 during their concert, but they were quickly defeated.

The DES had occupy several planets such as Saharastar and annexed it as their member state.

4 years later, the DES took over a ship, suspecting that some of the auditioners for AKB0048 might be aboard that ship. Before they could capture the auditioners, AKB0048 appeared, defeated them again, rescued the auditioners ,and took them to safety before the DES could catch them again.

DES also interrupted a handshake event in the Absolute Entertainment Protection Sphere (AEPS), but AKB0048 defeated them before they could do any harm. Above of this, they arrest the officers who are against the entertainment ban or that they do not return home their daughter participating in the AKB0048 idol group.

They caught Yukirin, Chieri and Sonata at Atamistar whom were sent to trial at Kasumigastar, which are later freed by Whole Over Technology Association and AKB0048.

The DES logo
Add a photo to this gallery 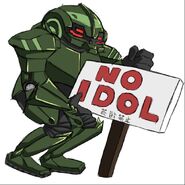 Retrieved from "https://akb0048.fandom.com/wiki/Destroy_Entertainment_Soldiers?oldid=31782"
Community content is available under CC-BY-SA unless otherwise noted.