The Chosen Lights (選ばれし光, Erabareshi Hikari) was the 2nd episode of Season 1 of the AKB0048 anime.

Nagisa, Orine and Yuka meet some of the other girls also heading for the AKB0048 auditions, and find out through the news that their friend Chieri is missing, and is suspected to be heading towards the auditions too. When the government military force DES takes control of the ship in an attempt to capture the auditionees, AKB0048 turn up to fight them and rescue the girls, one of which is revealed to be Chieri in a disguise.

The episode begins with Nagisa Motomiya, Yuka Ichijo and Orine Aida in a space airport where they hope to take the next ship to the AKB0048 auditions. As they are walking, a mysterious stranger suddenly bump into them. A Kirara belong to the stranger met and followed her in which the stranger invite her kirara to board a ship with her to Akibastar. This scene is followed by the opening song, Kibou ni Tsuite.

After the opening song the scene cuts to a terrified Makoto Yokomizo peering out of the window of the ship, terrified of the many asteroid belts and space debris floating around and how they might hit the ship. Whilst she is wailing, it is revealed that she ran away from her home in order to get to the auditions. She is heard panicking by a slightly confused Suzuko Kanzaki, who chooses to ignore her and continue on her way.

Suzuko is seen grabbing a drink from a vending machine when she overhears two security staff having a conversation about a stowaway that has been stealing food. After they have left, to Suzuko's suprise, the vending machine begins to shake and rumble and Sonata Shinonome pokes her head round the side of it, asking if the crew members gone. She asks Suzuko if she's a member of the crew, to which Suzuko says no. Sonata begs her not to tell anyone from the crew that she's here.

Sonata hops down from her hiding place and offers to bribe Suzuko with an autograph, noting that when she joins AKB0048 it'll be worth a lot. Suzuko asks Sonata to address the autograph to her. Sonata notes how the kanji for 'Suzu' in Suzuko's name can also be read as 'Rin' and so declares that her new nickname will be Linda. The crew members then appear, spotting Sonata, at which point she runs away in a fluster.

Orine, Yuka and Nagisa are seen looking out into space through a window. Nagisa is feeling homesick already, beginning to get upset at seeing Lancastar float further and further away. Yuka tells her not to forget her promise because the three of them are all going to join AKB0048. Orine reminds her that there is another girl - Chieri Sono - who was the first to introduce them to AKB0048 four years ago.

They remember about how Chieri came to visit Lancastar and was notably dressed in frilly, well-off clothes, though she still played in the water with them, Yuka questions if she would still want to join AKB0048, but Nagisa is certain she can't have forgotten their dream. At this very moment, hearing the word 'AKB0048', Sonata pops out of nowhere and enquires if they, too, are going to be auditioning to join AKB0048. Yuka asks who she is, to which she replies 'Sonata, of course!'

As Yuka escorts her out of the room, Orine asks why she won't let them tell anybody she's her. Sonata excitedly responds that she's going to join AKB0048, as well, to Yuka's suprise. At this moment Makoto appears, excitedly asking if they're all joining AKB0048 as well. Suzuko answers her question too, making everybody jump.

Everybody with the exception of Sonata is then seen eating a meal inside the ship's food hall. Makoto is paranoid that she's the worst singer of the group and won't be good enough to join AKB0048. Nagisa attempts to reassure her when her chicken is suddenly swiped by Sonata, who was hiding underneath the table. Sonata finally reaveals that she is in fact a stowaway and didn't get a ticket - in fact, she didn't pass the audition at all. Suzuko, who has done a lot of extensive research on AKB0048, tells her she has a good chance due to her height and hair. The other girls are amazed at just how much she knows.

At this moment, on the televisions inside the food hall, a news announcement status that Chieri Sono, heiress of the Zodiac Corporation, has mysteriously gone missing. Members of the ship's crew ask if the girls know her, for they received a tip-off that she was on the ship. In a panic, Orine, Yuka and Nagisa aren't sure what to say, so the crew give it up as a bad job and move on.

Nagisa, now certain that Chieri really is on the ship and auditioning to become a member of AKB0048, begins searching the ship for her. She stumbles across the mysterious stranger from the space airport again, who coolly remarks that her once shining Kirari has lost its sparkle and become dull. She asks Nagisa if she is going to turn in Chieri, which Nagisa denies. The stranger shrugs and explains that if she turns in Chieri, she will have one less rival. Even once you're in AKB0048, there is still a rivalry for the Senbatsu elections. The stranger turns to leave, telling Nagisa she's unlikely to become a member of AKB0048 if she doesn't realize the others are her rivals. As she leaves, Orine and Yuka run up to Nagisa. Noticing Nagisa's troubled expression, Orine asks what's wrong.

The scene cuts to Tsubasa, in a strange temple, telling someone or something that the ship carrying the first group of auditionees is en route. There are six of the candidates on board. The Great One that she is praying to murmurs something about tears, before Tsubasa exclaims that this is a part of the Holy Lyric. She decides to dispatch the 'Flying Get' and leaves.

The scene cuts to the girls sat in the lounge, with Nagisa recounting her story and how it never occured to her that they would be rivals. Sonata teases her until Yuka hits her in annoyance. Makoto is beginning to panic whilst Suzuko takes notes on her personality. Nagisa begins to look up at the sky, where she notices some strange lights. The alarm is set off and the ship begins to rumble and shake. Suzuko says that this must be a DES attack.

The DES are attacking because they received a tip-off that the girls bound for the AKB0048 auditions were on this ship. Nagisa and co crawl behind a chair in fright as the other passengers on this ship are terrorized. Yuka throws a ball of light to distract the DES forces whilst they make their getaway.

The girls have just begun to escape when a DES soldier pulls Nagisa back, leaivng the others helpless. Nagisa struggles until AKB Sanjou! suddenly begins to play on the loudspeakers. At this moment the very AKB0048 girls themselves appear, leaping in to save the day. As they battle the DES forces, Nagisa manages to escape with the others before realizing that she has forgotten her precious green ribbon. She makes her way back before the other girls can stop her. When Nagisa returns she is confronted by a DES soldier who grabs her. Nagisa struggles until the mysterious stranger appears and helps her. After the DES soldier has been defeated, she takes off her hat and is revealed to be Chieri Sono herself, to Nagisa's surprise. Suddenly the DES forces shoot out of nowhere and parts of the ceiling begin to dislodge, one falling directly on top of Chieri, trapping her. Chieri insists that Nagisa leaves and leaves the DES forces to her, but Nagisa refuses, saying she doesn't care if they're supposed to be rivals. As they are talking, Chieri's Kirara appears, glowing incredibly brightly in the prescence of two idols. All of a sudden Yuuko appears, informing them that this means the birth of an idol. As she touches the Kirara, it begins to glow a bright yellow colour. She tells them that they glow brightly around an idol's aura before singing a line from the chorus of Heavy Rotation, lifiting the piece of debris from Chieri in the process. She lifts Chieri up before questioning why she has pet Kirara anyway. Chieri explains that when she saw one at the AKB0048 concert on Lancastar, it followed her home and has never left her side since. Yuuko tells the other members of AKB0048 through her eirpiece that she's found two hopefuls as she escorts them through the ship on her platform.

Nagisa is reunited with Yuka and Orine in excitement as she sprints up towards them and hugs them. Takamina, Mayuyu, Suzuko, Sonata and Makoto are also present. Orine suddenly exclaims at Chieri's prescence.when all of a sudden a DES mecha appears from nowhere. Because she is a cyborg, Mayuyu extends a gun from her arm and locks on to her target. She shoots as Yuuko hurries the trainees out of the way to let Mayuyu, Takamina and herself battle.

As the girls are back in the ship, Nagisa wonders why no Kirara followed her home and contemplates if Chieri has been chosen to do this. At the same time, Chieri is wondering why her Kirara never glowed for her, but it did for Nagisa. As another attack begins, Yukirin talks to the other members on her earpiece. Chieri and Nagisa both grab onto something as they brace themselves for the attack and are sucked into a vortex. 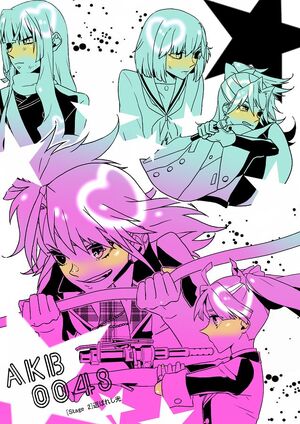 Retrieved from "https://akb0048.fandom.com/wiki/Episode_02_-_The_Chosen_Lights?oldid=31422"
Community content is available under CC-BY-SA unless otherwise noted.