Episode 04 - Your Efforts Aren't in Vain

Your Efforts Aren't in Vain (その努力裏切らない, Sono Doryoku Uragiranai) was the 4th episode of Season 1 of the AKB0048 anime.

The understudies watch a live concert by AKB0048, and go backstage afterwards to meet the opening act – the 75th generation understudies, known as the “Cursed Generation”. One of the members, Kanata, turns out to be Sonata’s older sister, and disapproves of her joining 0048 due to the harsh life that sometimes doesn’t always pay off. This is quickly proven during their first practice the next day, where some harsh words from Chieri causes Kanata to run off, crying. However, Mimori reminds her that it is okay to enjoy singing and she soon makes up with Sonata.

As the 77th gen trainees arrive on Akibastar, they are brought to see an AKB concert, which is opened by the two remaining 75th gen trainees, Mimori Kishida and Sonata's older sister Kanata. However, Kanata is not too pleased that Sonata had joined up and ends up arguing with her. Speaking with Mimori, Kanata reveals she joined AKB so she could get revenge on the DES for killing her father and did not want Sonata to face such danger. As dance lessons begin the next day, Kanata becomes frustrated when the instructor,Ushiyama, criticizes her lack of motivation and runs off. However, Mimori reminds her that it is okay to enjoy singing and she soon makes up with Sonata.

After the 77th Generation understudy selection during Episode 3, the girls finally arrive on Akibastar, the homeworld of AKB0048 and their home stadium. The girls are escorted into the stadium by Tsubasa, where they will be treated to a performance by AKB0048. But first, there is a pre-show performance, from the two remaining members of the 75th Generation, Mimori Kishida and Kanata Shinonome, performing Lemon no Toshigoro. During the performance, Tsubasa explains to the girls that the 75th Generation is referred to as the cursed generation, as all but two understudies, Mimori and Kanata, quit due to the extreme regime of the training. Two years have passed and neither have become successors to AKB0048. Sonata calls out to Kanata, encouraging her and nearly distracting her, if not for Mimori stepping in. Mimori and Kanata leave the stage, and AKB0048 performs, as the members of the 77th Generation watch in awe and shock.

After the show, the girls head backstage to meet the girls of the 75th Generation. Mimori and Kanata are changing as the girls walk in, and Sonata runs in and tackles Kanata head on, shouting "Onee-san!" Mimori back off as the girls watch in obvious puzzlement and asks if that is Kanata's sister. Sonata states she missed Kanata, but Kanata seems not to care and tells Sonata she should not have bothered coming at all. Sonata is hurt by this and the girls puzzled as Kanata stalks off, leaving Mimori to greet the girls and accidentally let her breasts fall out of her dress.

Mimori and Kanata then show the girls around the 0048 dormitories, including the kitchen, library, and baths. While the other girls seem impressed with this, Sonata holds back, not saying a word at all. When shown to the dorm room she will be sharing with Makoto, Yuka, and Orine, Sonata attempts to strike up a pleasant conversation with her sister, but Kanata ignores her and walks out. Mimori meanwhile shows Nagisa, Suzuko, and Chieri to their room, where Nagisa is excited by the prospect of becoming a new person. Mimori looks on, and is reminded of the girls of the 75th Generation who left those years ago. As Mimori goes to her room, the members of the 77th Generation go downstairs and find Suzuko looking at the pictures of those girls who in the past held Center Position, including the last girl to do so, Atsuko Maeda. Yuuko then comes up behind the girls, stating her admiration for the previous centers and that she will be the next member to become Center.

Meanwhile, upstairs, Kanata is yelling at Sonata for her stupidity of coming to the auditions and makes to slap her. Mimori stops her, but not before Sonata calls her a liar and runs away from Kanata. Mimori then inquires in

the room she shares with Kanata why she is not more excited to see her little sister. Kanata responds by saying she does not undestand why she and Mimori have not been chosen as successors, even when they went back and studied the original members. She then explains that her frustration comes from when her father was killed a few years back by DES, and she became an understudy for the sole purpose of getting up on stage and attacking DES for killing her father. She does not want Sonata to have to go what she has gone through. Nagisa awakens the next morning from a dream of her mother. She says good morning to Chieri, but Chieri responds like a zombie, and stumbles out of the room, followed by her Kirara. Later on, the girls are al

l at dance practice, with Kanata and Mimori leading. As a quiet Tsubasa looks on, Ushiyama, the dance teacher, chastises Kanata for her lack of enthusiasim and her commitment to her performance. He asks Chieri to switch with Kanata, to which Chieri replies no, that she wants to see the older girls set a good example for her. At this, Kanata runs out of the room, followed by Mimori, and the remaining girls turn on Chieri for her lack of feeling.

Nagisa confronts Chieri in the locker room following practice, and scolds her for what she said to Kanata. Chieri repsonds that while Kanata is probably as good or better then the current members of AKB0048, she lacks the radiance of an idol, something that no amount of practice will earn her. Outside, Kanata is angry that while all she cares about is avenging her father, she can't understand why the singing and dancing bothers her so. Kanata sings a little song. As Mimori walks up she joins in the song that Kanata is singing. Kanata screams for her to stop, otherwise she will start liking singing and dancing. Kanata starts to realize she can enjoy singing,

and Sonata and the other members of the 77th Generation appear on the hill above her. Sonata calls out Kanata's name over and over,

and Mimori mentions how lucky Kanata is to have a fan already and she is not even a member of AKB0048. Kanata beams and calls the girls down to join her and Mimori in singing the song.

Elsewhere, Chieri boards a train into the city alone, accompanied only by her Kirara. 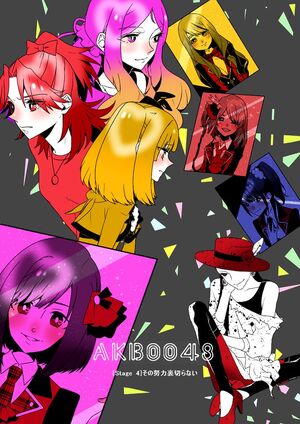