To Whom Does That Name Belong? (その名前、誰のもの？, Sono Namae wa, Dare no Mono?) is the 8th episode of Season 1 of the AKB0048 anime series.

The concert goes off successfully, and everyone congratulates the unders for standing in for the successors. Kanata goes to welcome back Takamina and the other members, however Takamina is still thinking back on what she witnessed at the underground temple. 00’s next concert is at Tundrastar, a planet fully under the Entertainment Ban, and so the group go off fully expecting DES's conflict. The DES attack early through, and with no help from WOTA members, Takamina goes out to fight with a few other successors, but has conflicting emotions and is shot down by a DES mecha. Kanata ends up saving her, and Takamina wonders whether it’s right to pursue her own dream while crushing someone else’s.

Following the stand-ins concert, Kanata, Mimori and the 77th gen understudies are asked to stand in for a guerilla concert on a planet where the entertainment ban is in full effect, prompting some jealousy from the 76th gen understudies. Meanwhile, Minami is still concerned about what she saw the other day, and acts weird around Kanata. As they make over there, Sae Miyazawa, a former 76th gen understudy, grows concerned about Megumi. As the increased security evokes debate about whether the concert should be cancelled, the ship comes under attack by the DES. Noticing Minami is struggling to stay focused, Yūko and Kanata set off to rescue her as she is overwhelmed by the enemy. As she recovers from her injuries, Minami laments that she does not want to graduate, but she does not want to hold Kanata back either. As Yūko tells Minami that she should focus on her dream above others, Kanata resolves to become stronger.

The concert starts with Aitakatta. The understudies cheer on their fellow understudies, and they decide to do the dance too. Ushiyama explains to Tsubasa that they wouldn't get off his case. Then it turns to a flashback, where the members are practicing Aitakatta. Suddenly the 77th Generation understudies burst through the front door. Ushiyama questions the girls on what they are doing, which Sonata answers that they want to observe their lessons. Ushiyama lets them have a corner of the practice room, which the girls respond with glee. The girls end the performance. Meanwhile, back at the dressing room, the girls are congratulating Chieri, Kanata, and Mimori. Megumi is left alone, only to be congratulated by Sae. Suzuko tells Kanata that Takamina is coming back any moment, which Kanata panicks and runs away.

Soon as Kanata ran to meet Takamina, Nagisa, Sonata, Yuka and others followed behind. 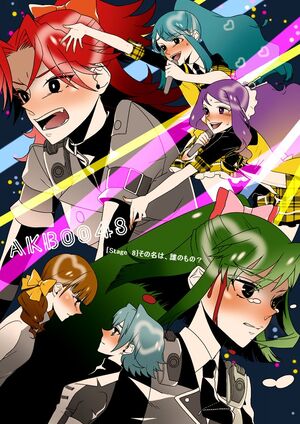 Retrieved from "https://akb0048.fandom.com/wiki/Episode_08_-_To_Whom_Does_That_Name_Belong%3F?oldid=31089"
Community content is available under CC-BY-SA unless otherwise noted.