Episode 16 - The Idol's Dark Before the Dawn

The Idol's Dark Before the Dawn (アイドルの夜明け前, Aidoru no Yoakemae) is the 16th episode and 3rd episode of Season 2 of the AKB0048 anime series.

As the understudies participate in a pre-election handshake event, Nagisa becomes concerned about Chieri, who has been feeling down since the announcement of the early results of the General Elections. During the event, Chieri learns of a noodle commercial using footage from her trial to promote their product. Later that night, Nagisa observes Yuuko and Takamina vowing to compete against each other in the elections before hearing from Mimori about her dedication to her fans. The next day, Chieri meets with her family's butler, Yasunaga, who gives her a video message from her father, revealing that his group was involved in her trial and has been promoting her career since then. As the day of the elections arrives, and the final results are announced, Mimori ranks at 10th place. 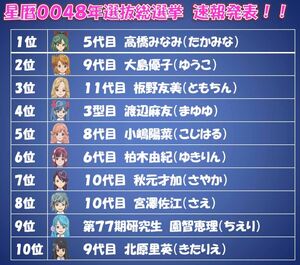