Hazuki has short old-green hair and eyes. Like all of AKB0048's successors and trainees, she has a heart shaped lining in her hair and eyes.

She seems to be loyal to Megumi since she helped her find information about Chieri Sono, which is Chieri's "link" to DES, being the daughter of Zodiac's CEO.

She first appeared in Episode 7, sitting beside the other 76th Generation members. She is seen happy when Megumi was selected as a stand-in for Yukirin for a concert that overlapped a peace ceremony on Kazakhstar that a few successors including of Takamina, Kojiharu, Yukirin, and Yuko, were invited to.

Hazuki, Mizuho, Megumi, and the rest of the 76th Generation.

Hazuki and the others of 76th Generation happy for Megu.

Hazuki and Megumi doing some research on Chieri.

Hazuki and the others surprised when Tsubasa states that the 77th Generation are chosen to perform wit the 75th Generation rather than them, who are from the 76th Generation.

Kanata trying to cheer Hazuki up. 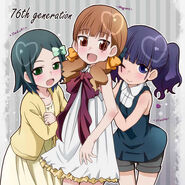 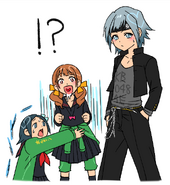 by Pixiv ID 133330
Community content is available under CC-BY-SA unless otherwise noted.