She has medium green moss colored hair, wearing it in pigtails. She has green eyes, and for an unknown reason, she keeps a lemon on her head. Like all the AKB0048 members, she has a heart in her hair and her eyes.

Himeko and the others surprised when Tsubasa states that the 77th Generation are chosen to perform wit the 75th Generation rather than them, who are from the 76th Generation.

Himeko sleeping with Megumi and Sae on the couch. 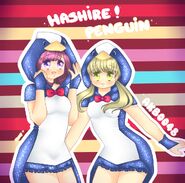 by Pixiv ID 133330
Community content is available under CC-BY-SA unless otherwise noted.
Advertisement