Mamoru (護) is a friend of Yuka Ichijo from Lancastar and Aoi Koenji and a WOTA member.

At first, Mamoru doesn't seem to like idols, but when Yuka Ichijo left Lancastar, he decided to do some research on idols. Since then, he has become very fond of idols, especially Suzuko Kanzaki, however, he secretly fonds over Yuka even more. He tells Yuka that he loves the Yuka that's the 00 member, but no longer loves the Yuka that wasn't. Aoi Koenji teased him about whether or not he voted only for Suzuko at the General Elections, implying that she suspects or knows that he loves Yuka, and most likely even more than Suzuko.

In the first episode, Mamoru is shown to be the love interest of Yuka Ichijo. However, later on when she tells him she wants to go to the AKB0048 audition, he tells her he was in love with her, but he doesn't think he can love her if she becomes an idol and they break up.

Towards the end of the season, he sends her a seemingly harsh message saying that he doesn't want her to come back to Lancastar. However, it is later revealed that this is because Lancastar has returned to being anti-entertainment and he wants to protect her.

He has joined WOTA with a new friend Aoi Koenji and he is apparently a fan of Suzuko. Yuka sings out to him and he reaches for her, but she has to leave during the concert.

While setting up the TV to watch the general elections, Aoi Koenji asks Mamoru who he voted for and he replies with Suzuko Kanzaki, but she asks if he voted for anyone else and he blushes and tries to mask it by hitting the TV harder.

In the last episode, he catches Yuka Ichijo when she fell off of her flying stand. They share a moment; however, Yuka is unable to embrace or kiss him. She sings a promise to him in a shaky voice and he promises her back silently and reaches for her while she flies off. 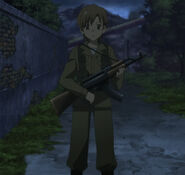 Mamoru and Yuka giving each other a high-five.

Mamoru's hand being held by Yuka.

Mamoru being sung to by Yuka. 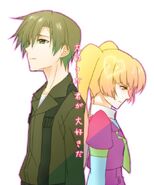