"If you want to see 00's concert, turn towards that light and run like the wind!"
—Mikako in Episode 13.

Mikako Minamino (南野 美果子 Minamino Mikako) is a photographer on Atamistar and a former member of AKB0048 as well as a former Center Nova who was also known as Minami Minegishi the 5th (峰岸みなみ (みねぎしみなみ)), also known as Miichan (みぃちゃん).

Mikako has a tendency to say words in pig latin, like saying Thanks like Anks-Thay or Sorry like Orry-Say. She's also passionate about her work as a photographer. However, when it goes to the subject of Center Nova, Mikako becomes very serious and even tells Tsubasa that she will do everything in her power to stop the latter from activating the Center Nova position, indicating that she knows something about what really happened to those who were the Center Nova that Tsubasa clearly does not.

During Episode 20, it is revealed that Mikako is working for Chieri's father to uncover the secret of the Center Nova phenomenon.

Later on in Episode 22, Mikako reveals to the current members of AKB0048 that the reason why she went along with the plan of Chieri's father was for the purpose of rescuing the past Center Nova. She tells the girls how at her final concert with AKB0048, she was performing on stage and the light of the Center Nova surrounded her. The Kirara morphed into more agressive beings and reached out for Mikako. Scared, Mii-chan ran from the stage, surrendering her previous identity as the Center Nova and graduating from AKB0048 to become a camerawoman.  She never had a graduation concert and had no desire to either. Nagisa asks Mikako if Yuuko Ooshima is with the other Center Novae, and Mikako confirms this. Nagisa is happy to here this. The girls then leave Mikako.

Later, the ship is attacked by a fleet of DES ships. A spark of electrical energy frees Mii-chan from her jail cell, enabling her to hijack one of the ship's combat robots and leave the ship. At first, the girls and Tsubasa think that Mikako has abandoned them to their fate and is intending to leave them behind. However, Mii-chan surprises them and attacks the DES forces, stating that this is her graduation concert and launches into a solo song called Blue Rose. Mikako's Kirara then appears and shines with a bright blue light. Mii-chan is then shot by an enemy fighter and the light vanishes. Mii-chan has a concussion and barely has time to recover before a rival DES robot appears and aims its gun at her cockpit. Mikako accepts this as her fate to die, but then Takamina saves her at the last minute, and states that while she cannot forgive Mikako, she can understand why she did what she did. The understudies of AKB0048 respond in admiration, and Nagisa pleads with her to help them recover the Center Novae. Mikako agrees and lets Takamina pull her back to the ship, just in time to escape with them.

Minami Minegishi was born on November 15th, 1992 in Tokyo, Japan. She is one of the original Team A members. She is known for her funny personality on TV. After Kana Kobayashi she is the member with the most theater performances (799, November 2014). In 2013 she had a scandal, after that she was demoteed back to Kenkyuusei. In 2013 she became captain of Team 4 and 2015 captain of Team K. She is part of the Sub-Unit No Sleeves (no3b) with Minami Takahashi and Haruna Kojima. She ranked #19 in this year election. 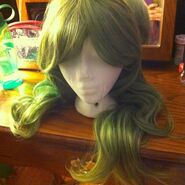 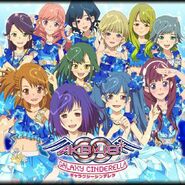 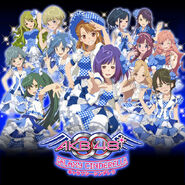 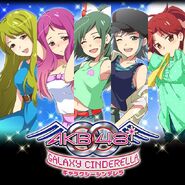 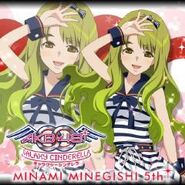 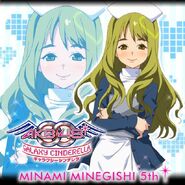 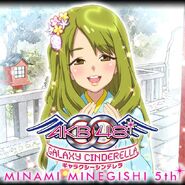 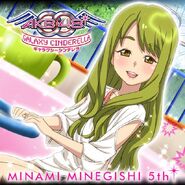 Mii-chan Galaxy Cinderella of Flying Get.

Mii-chan Galaxy Cinderella of the beach. 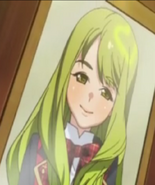 Mii-chan surprised to see the Kirara.

Mikako being surrounded by the aggressive Kirara.

Mikako reacting as a hand reaches out to grab her.

Mikako glowing with the light of her Kirara. 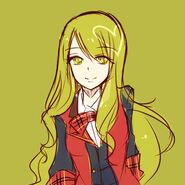