The Whole Over Technology Association (総合全技術協会, WOTA) is a group of dedicated AKB0048 fans who are willing to defend AKB0048 against the DES. In a way, they are like a group of bodyguards. One of the identified members of the WOTA is Naota, as Sae says in battle. Other identified members are Mamoru, Aoi Koenji, and Higashino.

WOTA was formed probably right after AKB0048 was formed. This group acts as a team of bodyguards for AKB0048. Kanata says that they're fans who push alongside AKB0048 when they fight. They possess lightstick-like missiles, called missilumes, and lightstick-like sabers and mecha armors with members of AKB0048 painted on it. They wear black pants and trenchcoats with AKB0048 written on it, red shirts and white belt and boots. Before they start fighting, they say: "Tiger! Fire! Cyber! Fiber! Diver! Viber!". In planets that are extremely under the Entertainment Ban, WOTA runs an underground TV network, so that inhabitants of those planets are able to get a chance to see AKB0048.

The WOTA at the handshake event.

The WOTA unleash their missilume attack.

A mecha armor emblazened with an image of Kojiharu. 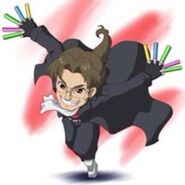 Retrieved from "https://akb0048.fandom.com/wiki/Whole_Over_Technology_Association?oldid=28864"
Community content is available under CC-BY-SA unless otherwise noted.